It's time to build institutions

There is a common narrative in tech spheres that (hyper-growth) startups and venture capital are the most powerful driving forces that shape society and progress. Revenue and number of users are referenced as tangible numbers of people impacted. And venture is the capital allocator that make this possible. The oxygen of the system that fuels it and keeps it running and alive. I used to think that startups and venture were the main driving forces behind progress in society. 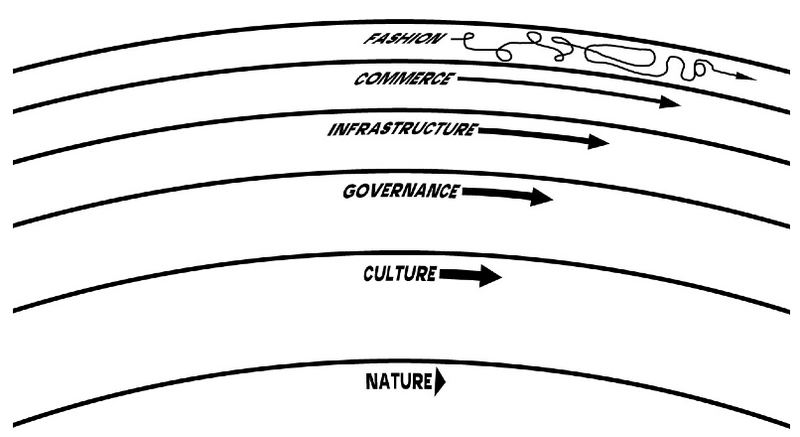 If a healthy civilization is composed of pace layers which operate on different timescales, then startups are the fast-affecting, top-of-the stack layers and culture, religion, and institutions are the slow-affecting, bottom of the stack layers.

There are a couple of reasons why institutions are able to have this type of long-horizon impact and startups often are not.

Firstly, by the time a technology is commercializable, and there is a market for a startup to access, it is almost a foregone conclusion. The startups of the next decade were mostly determined by the past twenty to thirty years (or older) of research and exploration.

The distinction here however isn’t just research (institutions) vs. entreprenuership (startups). The distinction is that work at the institution level is driven by a strong vision to chart the trajectory of a technology for the world before it exists, yet alone before there is a market for it.

Time and time again, we see that the largest pivot points of technologies in society were in fact created and explored out of someone’s (or a group’s) desire to push a certain view into reality and invent on principle. Long before it was commercially viable, before the technology was mature, and definitely before a market existed for related problems. Look to Licklider who continued to push his world view of the personal computer before there was any notion of a symbiotic relationship between human and computer, let alone a market for it. Or Yann LeCun and Geoffrey Hinton working on research in neural networks in the 90s when everyone thought the work was a dead end. Or early crypto infrastrcutrue work that setup the base layers of the system before billions of dollars of capital flew into DeFi.

The startups of today came about because of the ethos, visions, and explorations of those decades before them. This is in fact when technologists have the most agency for shaping the trajectory of society and progress.

Secondly, startups are hinged mostly on financial capital. In order to secure funding, you need to be able to paint a narrative for why there is a large market your product can solve a problem for. However, as we’ve seen in today’s climate, financial capital is cheap.

What is scarce and becoming increasingly valuable is all forms of other capital: social capital, human capital, cultural capital etc. Institutions have more agency in defining what capital they want to own and invest in, without the pressure of external forces and committments to shape their trajectory.

Thirdly, incentive structures in private enterprises drive optimizing for growth, in general, at all over costs. There is no room to consider opportunity cost. Institutions like the Etherem Foundation in comparison are always considering value over replacement - “if we don’t put a dollar into this, what’s the next best thing to put a dollar in?” This type of agency and optionality is valuable because

Note none of this is to say or imply that startups are not important or even less valuable than building institutions. Startups, like any functional pace layer, are an essential part of driving society forwards.

However, I think that we systemtically undervalue the importance and outsized impact institutions have. Many startups feel detached from reality exploring an extremely niche, specific problem, meanwhile it seems like there is a lot of unexplored leverage in thinking about and trying to build better schools, better colleges, better cities, better research labs, better communities etc.

Projects like Praxis, Gitcoin, EF, Verses, Atlas Futura, Reboot, and 0xparc are showing now more than ever the importance and potential this can have, and how crypto as a layer of infrastructure, can catalyze building these types of persistent institutions.

Institutions shape the way we act and think more than we realize. And they do this at different layers in both society and our lives. Culture controls the way we think and influences our actions. Religion and belief systems give us a set of rules and heuristics that we use to govern our lives by. Communities give us a sense of purpose and belonging which we define our identities by. Educational institutions teach us how to learn and influence what we choose to spend our lives working on. Cities give us a home and physical spaces to think, eat, share, learn, and be apart of each other’s lives. Countries give us patriotism and philosophies which we embody and uphold. And research, in all its forms of exploration, tinkering, inventing, and playing, shapes the future of technology before it becomes a reality.